Raffles came to us in 2015. Unhandled, terrified, and scarred. Not just physically, but emotionally as well. It literally took months for us to gain his trust and make him understand that he had nothing to fear. Even once the trust was established, we had to be able to handle him. He had spent his young life running “wild” and knew nothing of halters, lead ropes, grooming, etc. The first few tries at leading, he bolted so quickly that no one could hold on to him. Once again though, over time, he learned that everything was going to be ok. 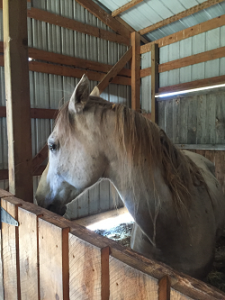 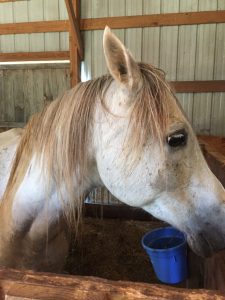 Never one to be the “boss”, but if no other horses wanted to be the leader, Raffles would take responsibility of the job. But, when challenged, he would back down quickly. The scars all over his body are a good indication of the past trials and stressful situations that he has been in. During his time here, we were careful not to put him in with very dominant horses as he would often cower, be kept away from the food, and just be stressed and chased around. As his confidence in himself and his herd mates grew, he blossomed into a breathtakingly beautiful flea-bitten grey with moves that would knock your socks off! 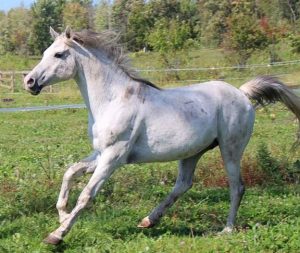 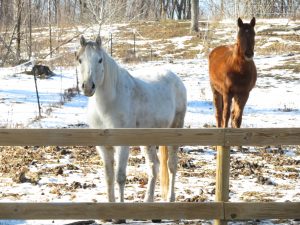 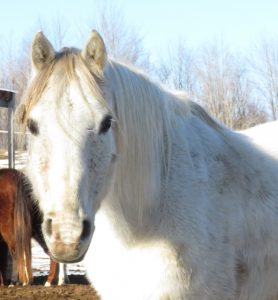 Raffles prior to leaving.

Raffles was competing in last year’s Trainer’s Challenge when he choked during feeding time: running while trying to eat. The trauma from that caused him to lose quite a bit of weight and it was determined best for him to come back here and rest while he gained his weight back. Sadly, he was doing really, really well in training and would have had a home easy!

In no time, Raffles had his weight and his zest for life back and was entered into the Trainer’s Challenge again this year. I will spare you all the gory details, though I am sure that some of you already know, but Raffles is once again, just 2 weeks from the completion of the Challenge, back with us. Only this time, I am so sad, angry, and completely disgusted with his condition. Only recently being told how wonderful he was doing and how so many people are interested in him, he came back to us yesterday looking almost exactly like he did the day he arrived back in 2015.

All his previous wounds had healed, though the scars remained, but he came back yesterday covered in new ones. Bite after bite mark that broke the skin. Dried up scabs from bleeding. Mane a snarly mess again. And his weight. Ugh! We vet our trainers and this one came with amazing references. We did not see this coming and I am beyond sickened that someone would allow him to be in a situation like that again. When we learned of what was going on there, we were able to contact a trusted person in that area to go get him out of there right away as we are so far away. And by the next day he was out of there. But, his wounds remain. His scars are now multiplied. And at this point, we can only hope that they are only skin deep this time. 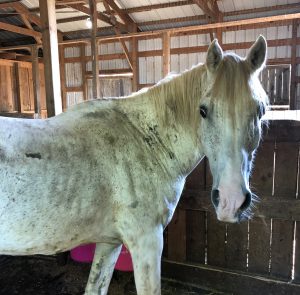 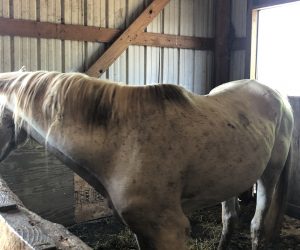 Raffles is now comfortably relaxing and unwinding in a stall while we evaluate him further. His rehab has began, again, and we are confident he will get through it with flying colors. Further evaluation will tell us if he was even being worked with as we were told and if so, we are hopeful that he will be ready for that home that he has spent years trying to find. Raffles’ beauty, charisma, and movement is wasted on the trails. He belongs in the arena for all the world to see. He will be a wonderful, trusted partner for one lucky person, but in the meantime, he needs your help. Please consider a donation towards his rehab after being failed by humans….again…. And help us ensure that he will never be failed again. Thank you.