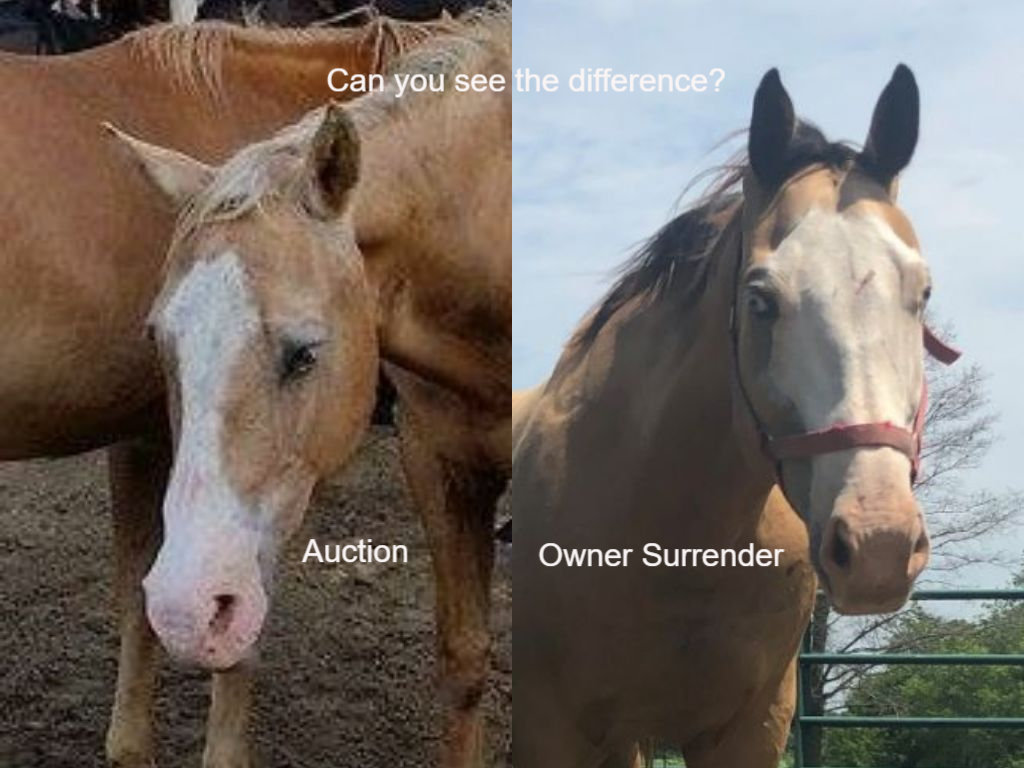 We had a great time at Breyerfest this past weekend as we journeyed down to the Kentucky Horse Park to watch the trailer for the reality TV series Horse Rescue Heroes as it was played by the Equus Film Festival. We met some great people and saw some amazing horses, trainers, and riders. But, it was business as usual back home. Three horses were surrendered by their owner who was failing in health and could no longer care for them. Thankfully, others from the Pony Tales Crew were able to be here and help this owner and her horses. This owner truly cared about the well-being of her horses. She could have easily sent them to an auction and made a few bucks off of them. Instead, she chose, with little to no hesitation, to pay a surrender fee and send them here. Yes. That is what I said. She PAID to have them come here. Why? Because she cared about them.

People don’t seem to realize the high UNlikelihood that the horse they take to an auction is going to find a good home. Sure, they drop them off and walk away happily thinking about what a wonderful home they will find and dream about what they’ll spend the money they get from them on (maybe even another horse!), but the truth is, they have likely just sent their horse across the border to be slaughtered. But, they don’t want to think about that. Not my horse. That won’t happen. Or so they tell themselves. Plus, they very rarely stick around to watch the results. They don’t even want to be there when the horse goes through the auction ring. Why? Because deep down they know….

It is tantamount to people dropping their old dog off at the vet and running for the hills knowing the dog is going to be put down. You see report after report from veterinarians talking about what an awful last few moments on earth the dog has as they are left alone in a strange room, with a strange person, and their human is no where to be found. My eyes fill up with tears every time I think about that poor animal so scared and lost and lonely at the end of his life with no one there he knows to comfort him as he passes over.

It’s hard to be there. I know it is. Believe me. Less than one month ago we had to let our old man Ozzie go. He had been with me for every bit of his 17 years. But, one night, he appeared to have a stroke and we knew it was time. He couldn’t hardly walk that morning, but he tried. I carried him down to the shop so he could “make his daily rounds” one last time as we waited for the clinic to open. He did his best, but I carried him for the most part. We sat in a chair and I kissed him and pet him and told him it was going to be ok. Barely able to control his body, he managed to lift his head up and lick my chin one last time as if to say “I know. It’s ok. I’m ready.” We took him in and we stayed with him the whole time. He let out a couple small whimpers as he knew he was not at home, but we hugged him and kissed him and pet him and he then relaxed and drifted off to sleep.

He had battled congestive heart failure for three years, was mostly deaf, and could no longer see well. But, every evening, he ate his dinner and readily and happily strode along on our 1 1/2 mile walk around the property. He was incontinent at times and he had his accidents. We always had to be on the look out for him because he would run up to cars as they pulled in and for some reason, just had to stop right in front of them where the driver couldn’t see. We had our hands full with that old boy, but I could not, for even one second, imagine sending him away because he was too much work. Or because I knew his time was coming. Only those that don’t care could do such a thing.

It is no different with horses. Just looking at the horses at the auctions, you can see the sadness, the loneliness, the helplessness. They don’t know why they are where they are. They don’t know what’s going to happen. They just know that they are not at home and their people are not there with them. Even just the auction environment itself is scary as they almost sense what possibly lies ahead of them. They didn’t ask to be there and most of them are there due to no fault of their own. They are there because they have been failed by humans, just like the dogs who get dumped at the shelters. Their owners could not or would not do the right thing by them, no matter what that may have been. They selfishly put them in harms way in hopes of making a quick buck with zero thought to the welfare of that animal.

So…it lands on the shoulders of the animal welfare organizations to step in and do the right thing by the animal. Whether that be simply getting the animal out of harm’s way or giving them that last act of kindness. It is a heavy burden that we carry, but the best interest of the animals out there is what keeps us going. Sometimes, we run across the caring owners like the one I mentioned above, that understand the burden that they are placing on us, and readily agree to help with at least funding. But, then there are those who just don’t wanna know. Who just don’t get it. Who just don’t care….

Take a look at these pictures below. Can you see the difference? The one on the left is the look of complete sadness and defeat as the horse stands among others at an auction. The one on the right is one of the horses that was just surrendered to us. They look similar in appearance even, but look at the difference in their faces, their eyes. Instead of sadness, the one on the right is curious of this new human (me. Lol). Instead of defeat, he expresses hope. Yes, he is in a new place, with horses he doesn’t know and people he doesn’t know, but he got on the trailer and left his home and rather than having to go through a dreary, dark, scary auction house where his life was literally on the line, he got to unload at another farm with other horses he may not know, but who are happy. He can listen to the birds chirp and feel the wind blow through his hair as he looks around at his new surroundings. He can move around. He can lay down. He can eat. He can drink. No hours on end standing on concrete in a tiny pen either tied up or too cramped to be able to move only to be run through the auction ring surrounded by strangers and loud speakers and facing two doors: one leading to the slaughter trailer and one leading to safety, and having no idea which door he will be able to go through. Instead, he is safe and he is happy. Because his owner cared. 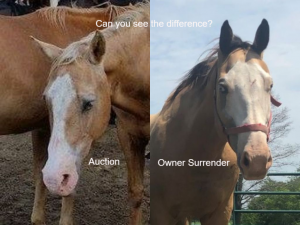