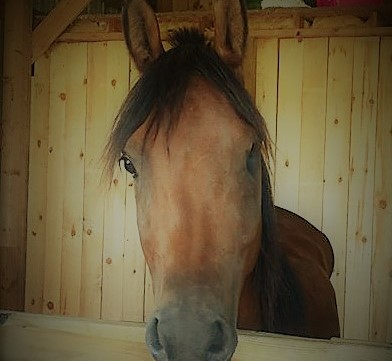 In 2013, a little, scared Arabian was dumped at a slaughter auction. He was not even 2 years old yet. He was alone. He was frightened. And he was headed out the door for slaughter. You see, back then, these “killpen rescues” did not exist. Back then, once purchased for slaughter, that was where they were going. No ifs, ands, or buts. Of course, he may have found himself going through another auction and another and another, until the killbuyers felt they could make some money off him at the slaughter plant. But, regardless, his fate was sealed. Until…

A rescue organization pulled him off the slaughter truck. They saw something in him that no one else at the auction did. And they saved him. During his time with the organization, he suffered a trailer accident in which the cornea of his left eye was punctured. It was deemed best to have the eye removed. It didn’t bother him having only one eye. In fact, he didn’t even seem to notice. He had a fun, playful, zest for life that brightened the spirits of everyone who met him. But then, winter was approaching, and the rescue was closing down. He needed a home and he needed one soon. Who was going to take in a 2yo one-eyed Arabian with winter approaching? Well, the answer was…me. 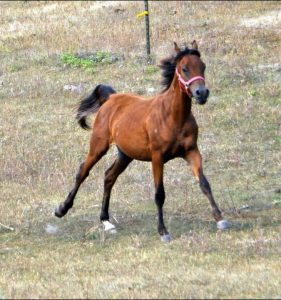 Little did I know when we drove to pick up this sweet boy how much my life was about to change. He brought something out in me that had laid dormant for years. Always nagging at the back of my mind, but always in the back. Rescuing horses, while a wonderful dream, seemed a foolish one at that. I thought that saving this one would be enough. And had it been any other horse but this one, it may have been enough. But, this boy taught me, in his goofy, quirky, playful, lovable, Kirby way, that rescue was where I needed to be. His zest for life, his happiness, his joy in seeing me when he could, got me through the worst time of my life.

He was saved from a slaughter auction…and he then saved me.

Sadly, we lost Kirby 2 years ago to unknown causes. But, his goofy, fun-loving spirit is imprinted in the walls and the pastures here forever. I swear you can see him walking beside every horse that we take in. He then leads them around and teaches them the ropes. They all seem to settle in so quickly. Even those terrified of people. As if there is someone out there with them telling them it’ll be ok. They are safe now. This one auction horse is now responsible for more than 200 horses being saved and one very lucky lady who misses her Kirby boy so much. 🙁

There will be many horses who need to be saved just like Kirby at the auction on Saturday. It’s the same auction that he came from. He will be there and he will show me which ones need us the most. But, we can only save as many as we have the funds for. We can currently save three, but we are hoping for 7. Kirby would be 7 years old this year. Can you help us reach that lucky number in his honor? For them? For us? For Kirby? Please. Give now. They are running out of time. 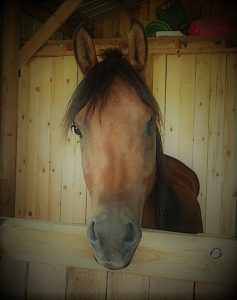