It was a long weekend beginning Friday evening with losing power (which continued for close to 24 hours), the auction on Saturday, transporting the ones we could save to their temporary quarantine facility, then vetting and transport to Pony Tales on Monday. We are tired, both physically and emotionally. There were so many others we wanted to help. So many more that deserved a second chance at life. The ones brought to the auction matted with burrs whose owner then tried to clean them up and led them through the auction ring and ultimately out the door to the slaughter trucks waiting for them. It takes a “special” kind of person to be able to do that. It was saddening and infuriating at the same time as the owner can “no sale” their horse for any reason. This owner did not though and they knew exactly who had bought their horses. If only we had more funds…. 🙁

But, I digress. Thankfully, because of all of you, the Lucky 7 1/2 escaped that fate even though their owners were not even there to find out who bought them. Most of them were quite nervous and unsure of what was happening yesterday as one by one, they were evaluated by the vet and once again loaded onto a trailer. The big guy, who readily loaded from the auction, was hesitant about getting back on when it was time to leave. He kept looking back at his new found friends and where he had spent the last 36 hours and you could tell he was very worried about what was going to happen if he got on. I had to wonder, did he have this same hesitation and longing backward glances when he was loaded up at his home originally to then be dropped off at the auction? Or did he readily load that time having no idea what fate awaited him? This gentle giant is so forgiving and so loving. How he ended up at the auction, we will never know, but he didn’t deserve to be there. None of them do.

He and the others are now safe here at Pony Tales and he seems pleased with his decision to get on the trailer that one last time. He has settled in nicely and is always ready for some hugs, kisses, and loving on. He has a chance now that he wouldn’t have if it wasn’t for all of you. For those who wonder where your donations go, now you know. They go to save these beautiful souls from the brink of the slaughter to giving them a chance that no one else wanted to give them. Thank you all of you and please don’t ever feel that your “small” donation is in vain. It only takes a little from a lot of you to do what we were able to do this weekend. We thank you and the Lucky 7 1/2 thank you. Remember: Never doubt that a small group of thoughtful committed citizens can change the world; Indeed, it’s the only thing that ever has. Thank you all!

💖Thank You For Your Support!💖 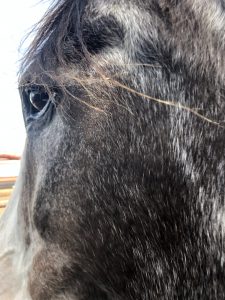