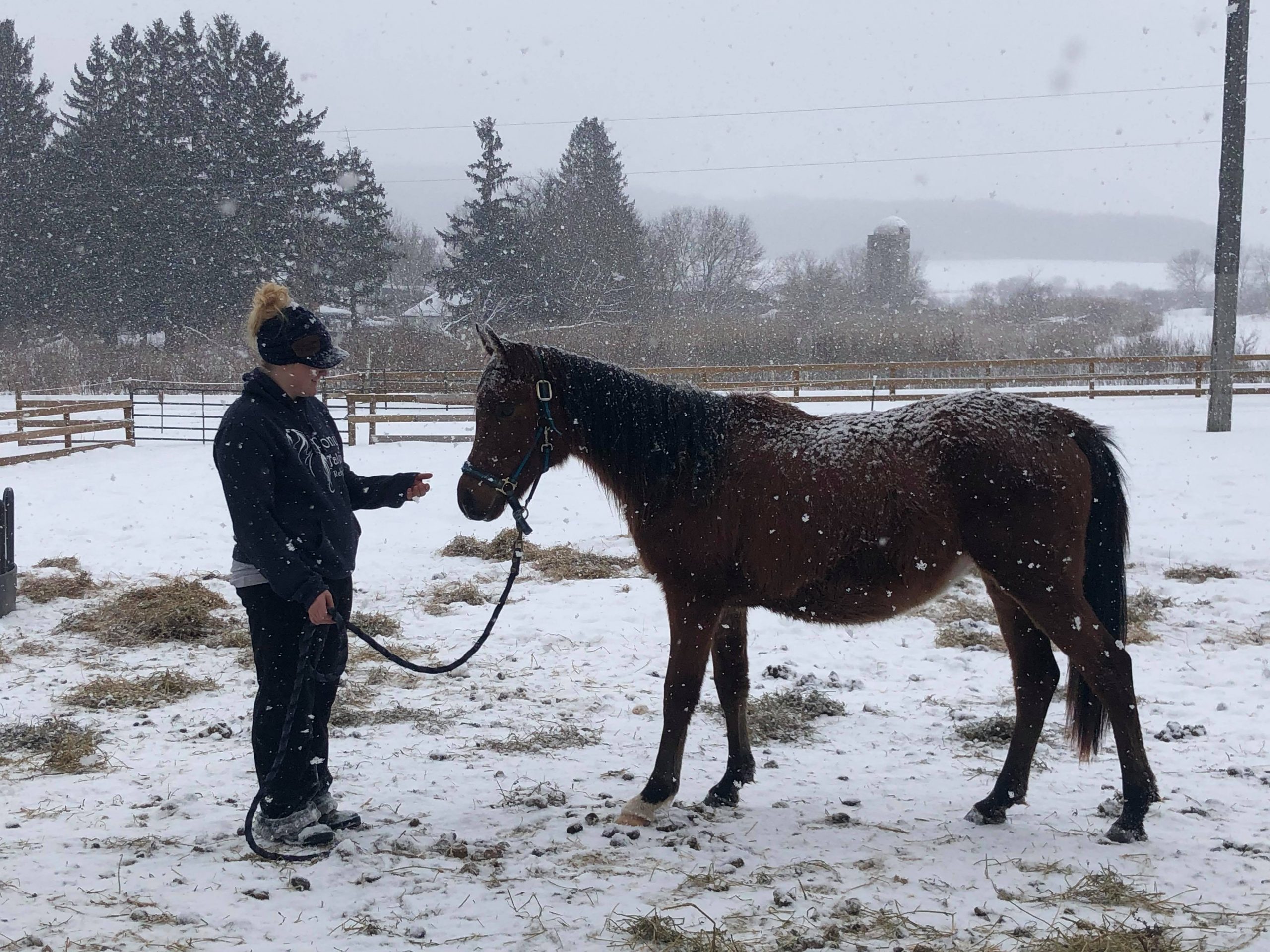 Good morning. I apologize for not getting this up yesterday. Such a crazy day beginning with technical difficulties first thing in the morning as our old website was officially dismantled. Which was great news! But, this also disabled our email. Not great news. So, the entire morning was eaten up with getting everything fixed, assigning new emails, and getting everything updated everywhere. While we were working feverishly on this, the trainers began to arrive for the day. There was discussion about the weather bearing down on us this weekend and a decision needed to be made about whether or not we go to the auction as planned. 6-10 inches of snow and a tenth of an inch of ice is predicted on our path of travel home from the auction beginning right about the time we would be heading home. Along with gusty winds and blowing snow. So, it was decided that we will have to postpone until next week. We can only hope that this storm will help keep down the number of horses that will be at the auction. :-/

The trainers got to work and before too long, it started to snow. We all thought what?? They didn’t say anything about snow today! It’s not supposed to start until Friday!! But, hey. It’s January. In Wisconsin. When the snow finally ended, the temps started to drop as we went from well into the 20s to well below zero overnight. We were sure everyone had plenty to eat and threw extra out just in case. The water tanks were all topped off and we began to hunker down prepared for the impending cold. We were just about to go up to the house and make dinner when the phone rang. And then it rang again. And then the messages and texts starting pouring in about when Horse Rescue Heroes was going to be airing on Amazon Prime as it was scheduled to premier yesterday. Everyone would check the site frequently, but by later in the evening, with Amazon still “pending” the release, Horse Plus loaded the episode to YouTube for everyone to watch. Click here to watch for yourself! The episode brought back a rush of emotions and memories from that day back in August. And of course by the end of it, I was crying.

We hope this episode will help lay to rest the myth that auctions are a good place to send your horses. We hear it every time we are planning an auction rescue. Those who are convinced that taking your horse to auction, especially if it’s well broke, ensures that it will find a good home. If only that was the case. Obviously there are good auctions out there. Auctions with only the high-dollar, well-broke, well-bred horses that sell for way over slaughter price, but those are not the auctions we attend. This episode shows that and while the auction house in TN is much larger than the auction houses around here, it is indicative of what we see at the auctions we do attend. Horses who’s eyes have lost all hope who are desperate for a gentle hand to touch them. Horses who are terrified and don’t know what to do with themselves. And those are the ones we want to help.

Way too late in the evening to make the dinner we had planned by this point, so we went to the local bar and grill for a quick bite. Got home. Double-checked food and water and finally poured ourselves into bed. Today we have a couple of horses to move and a snow storm to prepare for, but we are hoping for a much quieter day. With any luck, I will be able to update you all on how those best laid plans go. So for now, I will sign off and get to work.