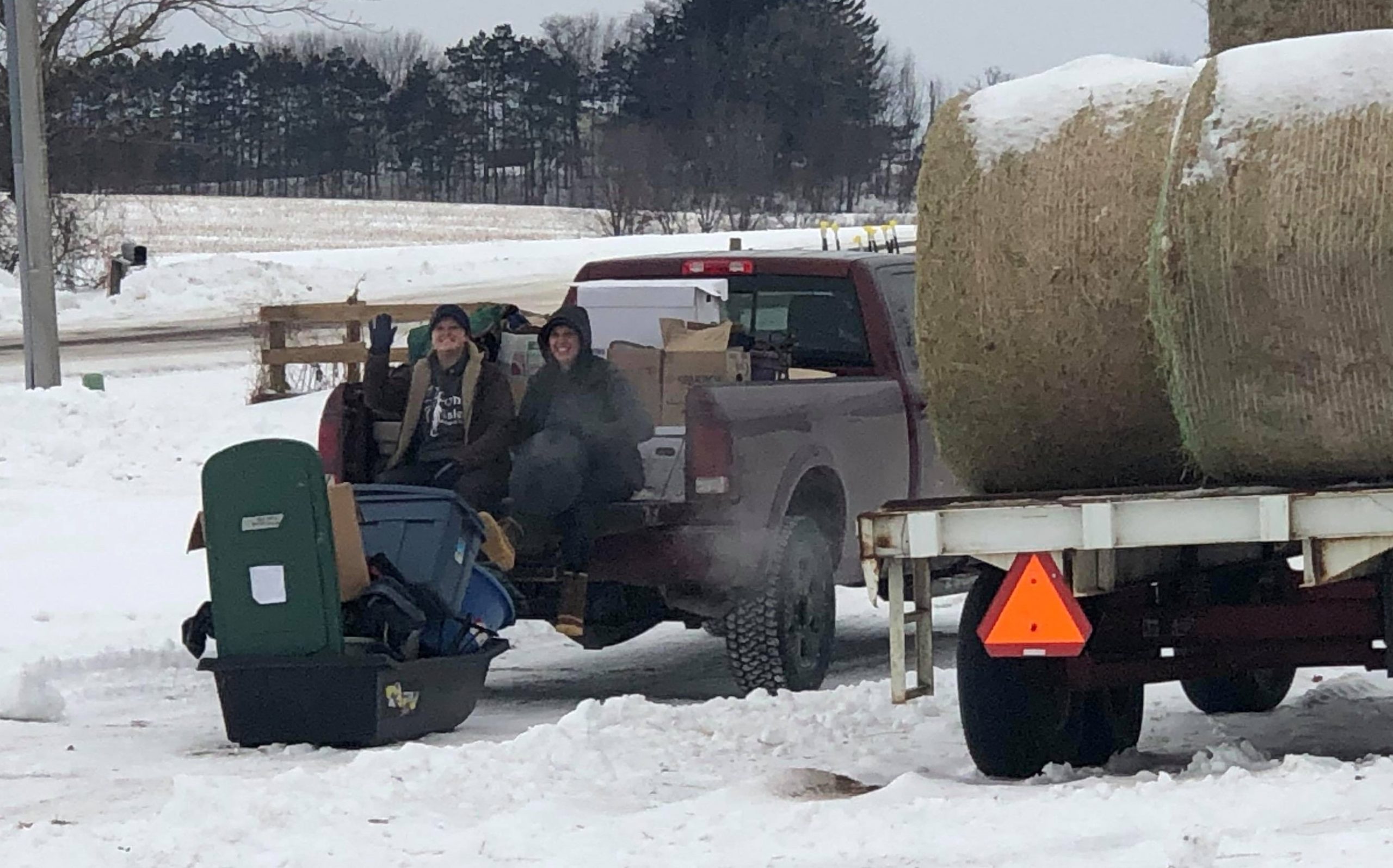 COLD start to the day today (Jan.17, 2020)! Though relatively warmer (as in slightly above zero) than yesterday, there was no sun today and it was windy. When I came down to the shop office, though the heat was cranked to 80 degrees all night, the temperature in the office was 50. 🙁 I discovered later that I could actually crank it up to 90 (which I did), but in all that time and as of now, it only made it up to 58. It’s…just…stupid…cold….

On top of that, our trainers were scheduled to come out and work with horses, but at some point…it is too cold to do that. Today was that point. Instead, the entire team still came out, but made it their goal to start moving the mountains of donated tack we have scattered everywhere around here into the new barn for sorting. There is SO much that has been donated, and we just haven’t had the space to go through it all yet. It was stored in trailer tack rooms, up on top of the old chicken coop in the old barn, in the house garage, in the shop, in our house, in the shop office. It was literally everywhere! Huge undertaking for them to dive into. Especially on such a cold day considering the majority of it was in unheated areas.

But, while myself and our secretary spent hours on the phone today getting our new emails functioning properly, this awesome team got so much done! In addition to rounding up and getting tack into the new barn for sorting, they got stalls cleaned, horses moved and blanketed, and everyone hunkered down and ready for the winter storm that was bearing down on us all day. The winds began to pick up and by 3pm, the snow began. Here comes snowmageddon and it was time for everyone to scatter and get home and safe before the roads became a nightmare. My amazing mom came out this morning to top off water tanks so everyone would be sure to have plenty of water while enduring the storm and as the snow began to fall, I finally had a chance to get to town myself and stock up on necessities through the storm.

And man oh man was that little grocery store in Bloomer busy!! While I had planned some delicious, creative comfort, snow storm meals this morning, by the time I was able to get to the store, I no longer cared. So, I grabbed this and that and the other and made sure we had at least enough food and what-not to prevent us from having to brave the roads later tonight or tomorrow as the winds reach 40+ miles per hour with 6-10 inches of newly fallen snow. I’m not even entirely sure what I bought as I think about it, but I know there was gravy and bread involved, so…comfort food enough!! Lol.

In the end, we got the new email addresses up and functioning properly, the horses are tucked in as needed and prepared for the storm, and while no one really got worked with today, it warmed my heart, even in this stupid cold, stormy winter storm warning, to see these wonderful three ladies outside in this grossness, smiling, laughing, having fun, and getting things done. When life gives you lemons…

We are really thankful that we delayed our auction rescue today as much as it hurt to do so. One auction scheduled for this weekend was actually cancelled, so we hope that perhaps the one we were going to attend was cancelled as well. The snow began right about the time we would have been loading and heading home. The wind and snowfall is increasing by the hour and it simply was a wise decision. We are planning to attend the auction next Friday though and we are over half-way to our new goal of saving 6 horses from slaughter. Please pray for good travel weather and if you can spare even the smallest amount to help us reach our goal, we would be so thankful. Thank you all!